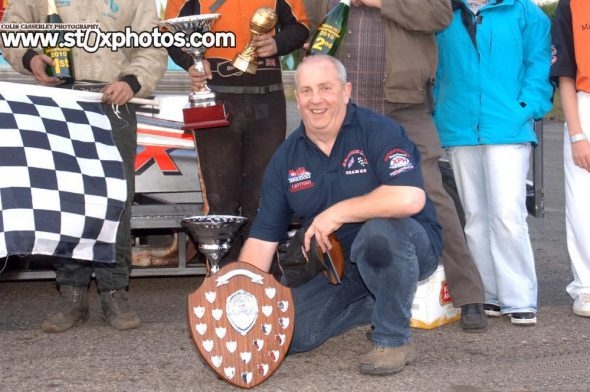 Dave was the man who made the championship what it is now, a man who gave so much to the sport and asked for so little back. Through personal sponsorship with many drivers on the track and of course the championship event there are very few people out there that Dave hasn’t helped – either directly or indirectly.

He left us in 2016 to head up to the giant Stock Car track in the sky. His untimely exit left friends and family stunned and of course the sport had a heavy heart when the news came through. The championship will continue as we feel it’s what he would have wanted – knowing Dave there would have been hell to pay if it didn’t!

Below is the thoughts of Mike Ashcroft, a good friend of Dave’s –

“It’s difficult to define Dave in a short piece but I first met him in the early 1990’s on a Bradford Odsal Stockcar Supporter trip to Holland for the annual pilgrimage to Baarlo to take in the Long Track World Final. Dave and I immediately hit it off and spent much of the weekend in each others company usually accompanied by several others and several beers!

I been watching stock cars since 1979, Dave much longer and his depth of knowledge and ability to retain the minutest of detail from years gone by was, frankly, astounding. He also had a wicked sense of humour, sometimes could push the boundaries of good taste to the extreme but underneath it all had a heart of gold, would go way out of his way and inconvenience himself (sometimes others) to help anyone and was always, always the life and soul of any gathering.

I personally have missed two world finals since 1979, Ray Tyldsleys (1989) and Lee Fairhurst (2012) but at every other one Dave and I plus a fair few other have stood together to watch the big ‘un! This year’s world final was very strange due to Dave not being with us but I was delighted that Debbie (Dave’s other half) and Liam (son) were able to join us as we raised a bottle of his favourite Westons cider in his honour.

Dave originally came up with the idea of the under 25’s championship in 2005, many (including myself it has to be said) were sceptical that a fan, no matter how well known, could pull it off. Undeterred Dave pressed ahead and with the constant help of his partner Deborah not only made the event a success but managed to grow the event year on year to the point where most see it as a championship in its own right.

The Under 25’s championship has raised literally 1000’s of pounds for the young talent of BriSCA F1 and due to the way the prize fund is spread throughout the race many drivers have had a share of the spoils nit jut the winners or top three.

Many had presumed that this year’s championship race, if it went ahead, would be renamed in Dave’s honour but Debbie is quite insistent that that would not have been Dave’s wish so the BriSCA F1 Under 25’s Championship will remain just that, plain and simple. However, a close group of friends and family have pledged separate sponsorship to allow us to purchase a trophy in Dave’s name which will be raced for in the meeting final on the same night thus giving all drivers most of which knew Dave very well the chance to hold the Dave Leonard Memorial Trophy.”